Cloud Seeding is the science of using particulate matter to induce water droplet formation in the atmosphere. ie, make it rain. solid fuel rockets spewing metal salt smoke have been used by the US and China with mixed success in weather modification. Smoke particles seed water droplet formation quite well due to their perfect size to stay airborne. Now smoke from the west coast fires has drifted west (contrary to normal pacific wind patterns) out to the cyclonic anomaly. we will see if this is a major rain event setup that would be welcome to put the fires out? or how about a west coast hurricane to stay with the 2020 apocalyptic theme?

here’s a higher contrast view of the smoke

so, pretty much all of cali is either on fire or under the smoke. very drastic today about noon went from lovely day to red sky.

yesterday, and then today wind shift,

The first of the fruits are ready. my summer art project is finishing its first phase of experiments.

first the mystery melon that got cut off it’s vine before i thought it was ready. well, ready or not, it was awesome sweet and delicious better than any other melon ive ever had. might be my sweat in it….

then there was possibly the only cabbage to NOT be destroyed by the white moths. best wok up ever.

i ate peas all summer, and still should have enough to see next year 10x as much as this year.

and the biggest surprise of all is still waiting for me to unwrap it. no idea how to tell when its ready, some say stem shrink, some say yellow ground spot, i say i dont know how to attach it back onto the vine if i pick it too early…..

i’ve been using the astrolog program for 30 years now and still find new settings and configs. how about the whole year of 2020 in one simple picture? of note: mars retro beg september, and jupiter saturn junct in dec.

so one big experiment to see what will grow out here. i guess this is my art project for the year since the covid fearporn shutdown all the fun things….

so this was the first repair to clue me in to the ceramic package cold solder issue.  i had been chasing a “bump its fixed” bad receive issue.  every so often the SSB receive would drop down to no S meter reading and barely audible for even nearby 20 over signals.  a good bump would fix it for ahile, then it would drop out again.  after opening the case, resoldering any suspicious joints in the area, closing back up maybe two dozen times, i finally removed the shield over the DDS unit.  pressing on the PCB around it seemed to have the greatest effect on the cutout.

thiere are two direct digital synthesiser units in the ts-570. they consist of an extinct custom chip F71022 and two ceramic pack precision resistor ladders.  they are ic501 and 502 are the DDS, and CP500 CP501 CP502 CP503 are the four packs.  my guess, the ceramic packs are only side soldered and heat expansion delta from the epoxy PCB cracks the joints.   normally surface mount components do not get cold solder issues, its the hand soldered bigger parts and jacks usually.  but these are like  little ceramic circuit boards on top of the regular epoxy board and they dont stretch and contract the same. i reflowed cp500 and 501 that go with ic501 which gens the 8.83mhz carrier to the mixer and that cleaned it right up.  pushing on the pcb no longer cut the SSB.  these ceramic packs are in bunches of kenwood radios from 80’s onwards as they are very precision and probably temp stable too.  tm-733 uses one for PL tone generator, ts-950sdx has same double DDS chips same packs, etc. 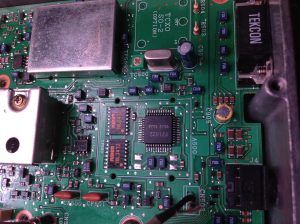 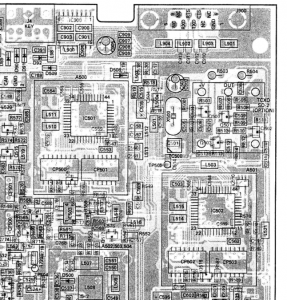 i know not best pic, but here is the dds unit w shield off.  other dds is top left still under metal,shield.  here looking at tx/rx board, serial jack top right, dds is big square chip in middle, and the resistor packs are to the left of the DDS with red lettering.  i used a 1/64″ tip soldering iron, smeared flux on both sides of the packs, no solder, just touched each “notch” on the sides that is the contacts.  no real legs or leads, just conductive paint goes from top of pack over the side edge.  not sure if it continues under the pack.  carefull not to scrape this paint off, and go in hot and fast and get out cuz the ceramic sucks 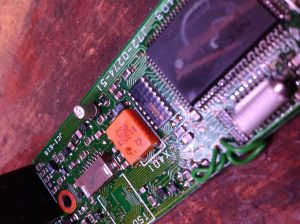 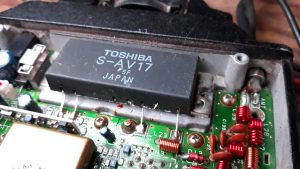 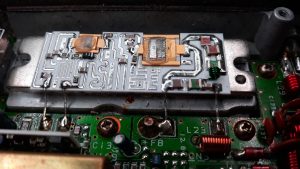 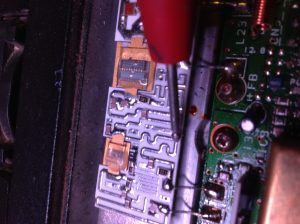 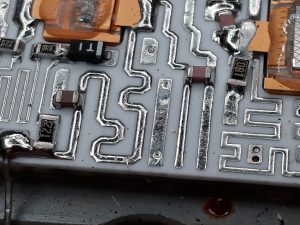 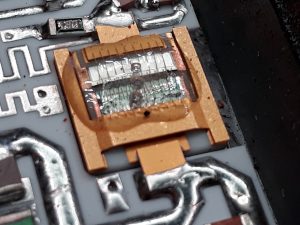 so the little 6volt lightbulbs on this awesome Kenwood TM-733radio burned out.  made it 27 years ao thats pretty good.  soldered in some white 3mm LEDS and changed the series resistors, boom, more readable than the orgiinal and way less current draw.  next one ill try warm white, i kinda miss the warm glow of the original even if this has netter contrast. 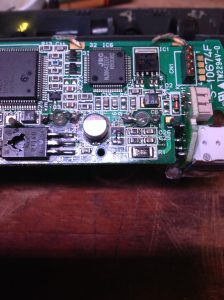 command and shop trailers both made the trip to the new camp.  i give thanks to the goddess of bearings and axles. 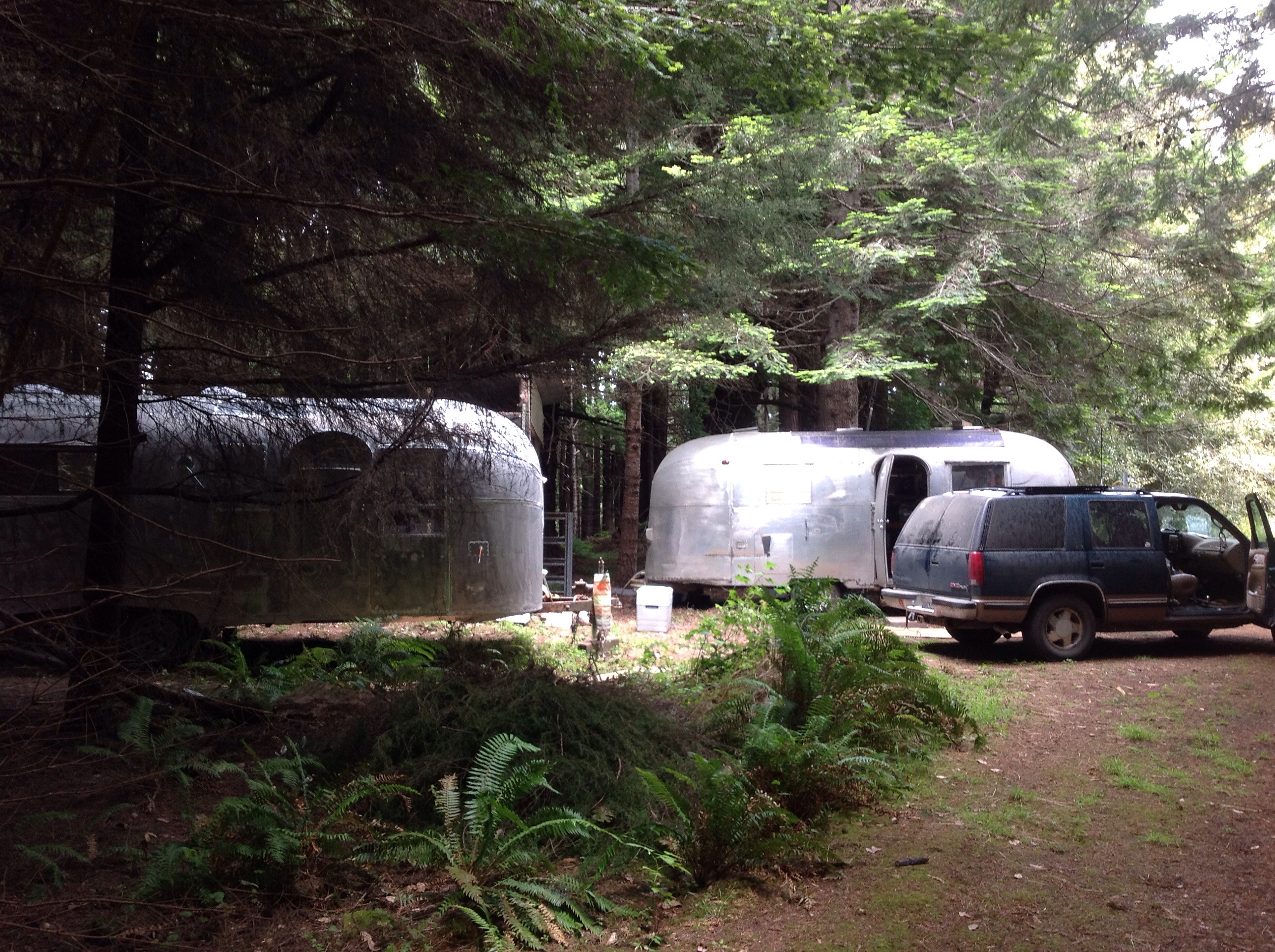 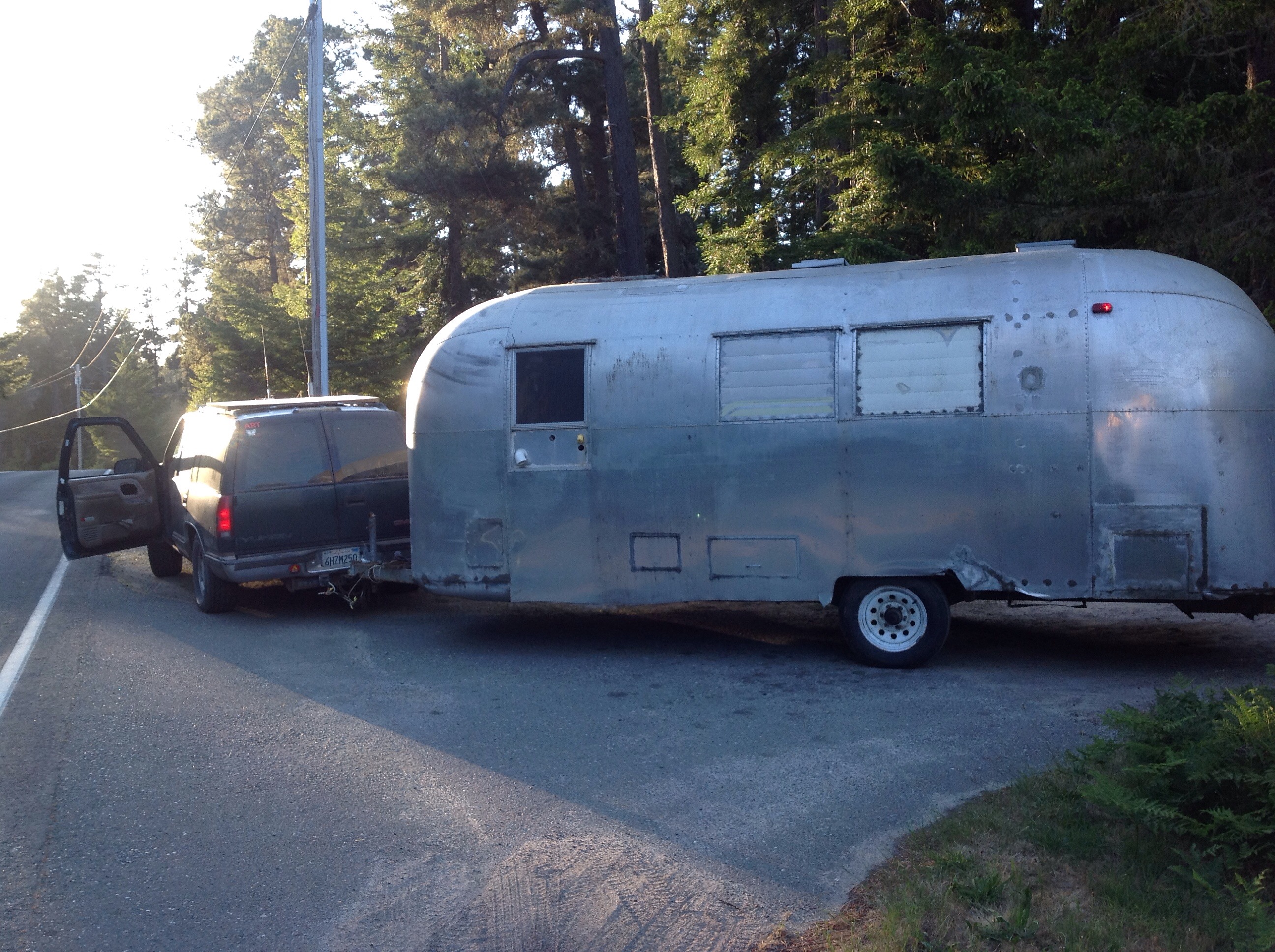 new camp site is just what i need for a couple months of re-fits and bolt downs for the big run.   fitting to my what-comes-next theory, a snappy cold wave pushed thru last nite.  last satellite pic from ridge camp was a clear one.  we’ll see how good reception is at the new site, moving the house trailer in the morning. 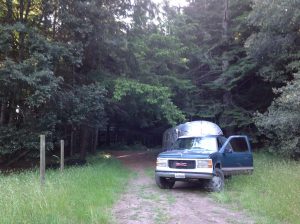 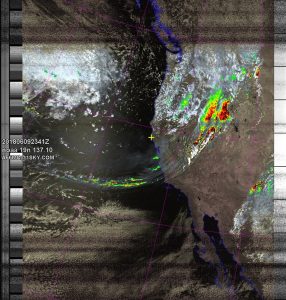